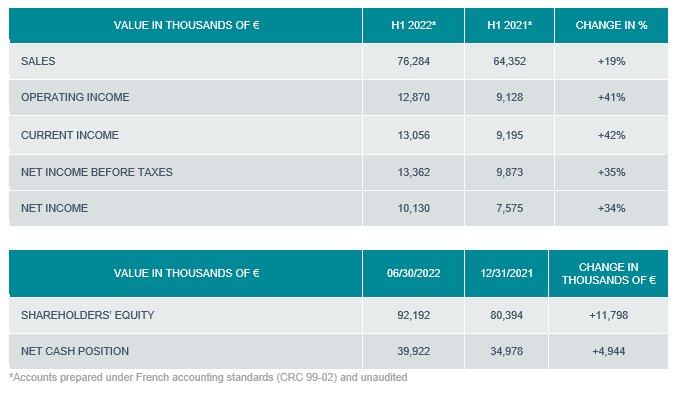 Esker’s 2022 half-year sales revenue grew 13% based on constant exchange rates. Cloud-based revenue increased 17%, representing 80% of the company’s overall revenue. Implementation Services (Consulting) grew 9%, increasing in Q2 after the pandemic resurgence in Q1 and the resulting shortfalls of resources and personnel for both Esker’s teams and its customers. Traditional licensed and legacy products decreased by 26% to represent only 4% of company business.

At the geographic level, all regions achieved double-digit growth. The U.S. remains the most dynamic region with +15% growth (at constant rates), followed by Asia Pacific (+13%) and Europe (+12%).

The evolution of the rate of the euro compared to the other currencies used by Esker (mainly USD) reinforces the operational dynamics of the company’s business. At current exchange rates, revenue growth reached 23% for cloud-based revenue and 19% for all business combined.

The dynamic pace of signed contracts was particularly noted in Asia-Pacific (+62%) and Europe (+16). The U.S. saw a pause in booking growth due to an unfavorable base effect in the first half of the year, which should be reversed in Q4.

To fuel future growth, Esker continues its recruitment efforts. Average employee numbers this half-year were up 12% (93 employees) to reach more than 900 employees as of June 30, 2022. Efforts focused particularly on Consulting teams (+15%), as well as Sales, Marketing and Customer Support departments (+13%). Additionally, sales and in-person marketing events (e.g., tradeshows) were up 24% this half-year.

Financial income essentially includes the impact of exchange rate variations on the company’s current operations (0.18 million euros). Exceptional income includes the adjustment in value of treasury shares used in the program to ensure the liquidity of Esker shares on the markets.

Esker has acquired a 50.1% majority stake in Market Dojo, a U.K.-based eProcurement software startup.  Market Dojo’s operations have been consolidated in Esker’s financial statements starting June 1, 2022, therefore not having a significant impact. Market Dojo’s current growth rate trend for 2022 is expected to be between 17-20%. In addition, Market Dojo’s acquisition led to the booking of a preliminary goodwill amount of 9.7 million euros. Its final computation and allocation will be made in the 2022 annual accounts.

The company’s net cash increased significantly to 39.9 million euros despite a 24% increase in the 2022 dividend.

Throughout this half-year, Esker took advantage of the favorable economic climate to take out new fixed-rate bank loans (BPI, BNP, Société Générale) for a total of 17 million euros. These loans have strengthened the company’s financial structure and will enable it to seize external growth opportunities to complete the company’s solution portfolio and accelerate growth if market conditions allow.

Given the accumulation of economic uncertainties, Esker conservatively anticipates its full-year growth between 12-14% at constant scope and exchange rates. Without significant change in exchange rates over the rest of the year, published growth will be significantly higher. At this level of revenue, profitability is expected to stand at around 13-15% compared to an initial objective of 12-15%.